Liz Ahmann No Comments ↓
I invited Alan Brown, creator of the ADHD Crusher videos, to share his thoughts on key neurotransmitters (brain chemicals) that impact ADHD. Here’s what he has to say:
Many people with ADHD have heard of neurotransmitters – and have at least some inkling of what they do. But I bet very few of us could describe their unique functions – let alone how they can parlay into alternative ADHD solutions.
I believe it’s worth getting better acquainted with these critters. So in this guest blog (thanks, Liz!), I’ll do a quick summary of the neurotransmitters we should keep track of, and offer a few ways to get these neurotransmitters working for you.
Neurotransmitters the ADHD Teen or Adult Needs to Befriend
There are three neurotransmitters of importance to the teen or adult with ADHD:
1. Norepinephrine is a stress hormone that, in its role as a neurotransmitter, affects key parts of the brain associated with attention and response, among other things. Some medications, Strattera for one, is designed to help with norepinephrine levels.
2. Serotonin is found primarily in both the gastrointestinal tract (yep, your gut) and the central nervous system. It’s widely believed to contribute to one’s feeling of happiness and well-being. It also has some cognitive functions, playing a role in memory and learning.
3. Dopamine is the “All-Star” of neurotransmitters, if you ask me. It’s responsible for motivation (which can be used for good or not-so-good purposes). As you may know, dopamine’s the thing that some illegal drugs “jack up”, making you seek more drugs when addicted. But if its powers are harnessed for good, dopamine  can change your life on both a daily and long-term basis (more on that below). Dopamine also has a key role in working memory, attention and cognitive function. All-Star, indeed. 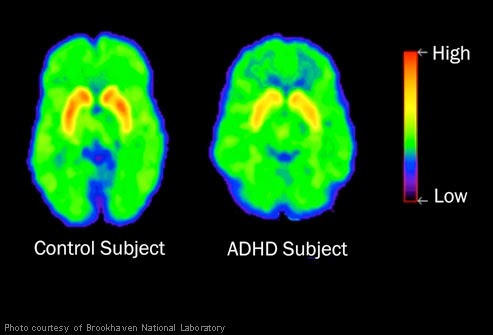 “It’s dark in here! Let’s light up some more neurotransmitters like in the other guy’s brain!”  – ADHD Brain
Lighting Up and Leveraging Your Neurotransmitters
Awareness… I’m a big proponent that awareness alone is a powerful ADHD solution. So just knowing about these powerful (neurotransmitter) agents is great. But we can go beyond the awareness to putting these three guys to work for us. Read ahead!
Exercise… Harvard psychiatrist John Ratey puts it simply: “Exercise stimulates a brain chemical that acts like Miracle-Gro® for the brain.” When you exercise you’re giving your brain a jump-start. When your blood gets pumping, your brain releases important chemicals that help “crush” your ADHD. Exercise increases the neurotransmitter chemicals regulating the attention system. And regular exercise also helps improve our mood and attitude. Get at least 20 minutes of cardio a few times a week – running, brisk walking, cycling – if you really want to feel a difference.

Diet… Protein triggers alertness-inducing neurotransmitters that help you focus. (Which is the opposite of what sugar and simple carbs do!) You can get quality protein from fish, lean meat, beans, dairy and protein drinks or powders.

Diet can specifically affect serotonin levels, and certain serotonin-boosting foods that may help in this effort are dates, bananas and papayas. Just be sure to eat these along with some protein – like dairy or peanut butter – or the fruit’s sugar will cancel out the fruit’s neuro-benefits.
Self-Motivation… Dr. Russell Barkley tells us that we ADDers are weak in the fronto-limbic circuit, which is the center of self-motivation, “where you think about your goals, and it actually motivates you.” He says that unlike non-ADDers, WE seem to LACK the ability to engage in a self-disciplined, persistent course toward our goals – unless there’s some looming threat or other incentive.

But those of us with ADHD can confound that handicap by having strong desires that trigger dopamine production via emotion. . What I mean is, you can fire yourself up by conjuring imagery of past frustrations and judo-flipping that into positive determination to move ahead…or using powerful desires for a certain future life to generate motivational fuel. It’s a powerful “brain hack” that results in action. (I have a video that talks about how “nagging desires” can fuel emotions that motivate:  ADHD Crusher™ Video I, Way 2: Get a Nagging Desire.)

Our ADHD tribe has unique brain wiring, and as a result, a unique relationship with norepinepherine, serotonin, dopamine,  and other neurotransmitters. The more we understand our body’s particular chemistry, the better our efforts will pay off.
Now, go fire up that brain!
-Alan Brown

NOTE: An executive and entrepreneur, Alan Brown is the creative force behind ADD Crusher™ videos/tools for ADHD teens and adults. Undiagnosed for decades, his untreated ADHD manifested in underachievement, failed relationships, substance abuse, and worse. Once diagnosed, he found it difficult to learn coping strategies from books, so he developed his own proven strategies while building a successful advertising career and several start-ups. He’s a featured presenter at ADHD conferences and webinars in the U.S. and abroad, and gave a TEDx Talk on the plight of undiagnosed ADHD adults. Get Alan’s free eBook, “5 Things You’re Doing Every Day that Make Your ADHD Worse” at ADDCrusher.com